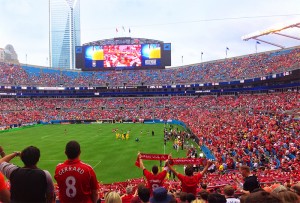 Last year over 69,000 people filled the Bank of America stadium for the A.C. Milan verses Liverpool soccer match. This year, international organizers are planning for even bigger crowds to fill Charlotte during 3 international match-ups.

On July 15th there will be a double-header at the stadium. Cuba vs. Guatemala & Mexico vs. Trinidad and Tobago, both games will be official matches of the CONCACAF Gold Cup Global Tournament.

On July 25th, organizers are hoping for the biggest soccer crowd our city has ever seen when Chelsea FC takes on Paris Saint-Germain FC for the International Champions Cup

Liverpool-AC Milan almost filled the 74,000-seat stadium, with attendance of 69,364 for the Charlotte match. Early pricing on tickets are now ranging from $34-$397 for the Mexico and Cuba Global Gold Cup double-header games and $72-$464 for the FC International Champions Cup game.