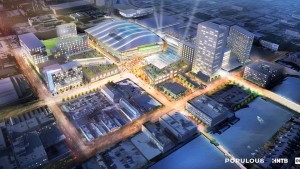 The Bucks have just announced a massive new stadium and sports complex project in the heart of Milwaukee. The main feature would be a new 17,000 seat state-of-the-art $500 million arena just north of the Bradley Center. The complex would also include practice facilities, entertainment venues, new office space, residences, bars, restaurants and a massive public plaza.

One of the most significant reasons for the new complex is the NBA-imposed deadline to either over-haul the Bradley Center, build a new arena, or lose the Bucks to another city.

The Bucks have at least $250 million to start with, as Bucks’ owners Wes Edens and Marc Lasry have pledged to contribute $150 million, and former owner Herb Kohl has pledged another $100 million.

The remainder of the money will come from; the state borrowing $55 million, the Wisconsin Center District issuing $93 million in bonds, the city contributing $47 million for a revenue-generating parking structure, and the county contributing millions in uncollected bond notes.

By capping the amount of public borrowing, state officials are hoping to prevent taxpayers from picking up the cost of cost overruns, as happened with the construction of Miller Park, which required an additional sales tax burden placed on the surrounding 5 counties.

What do you think of the new arena and entertainment complex deal?