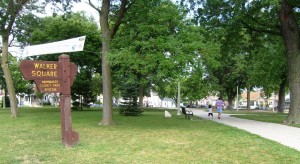 In a remarkable new trend, Milwaukee is beginning to build it’s free WiFi network across the city. The fist location is now up and running in Walker Square Park.

This first local WiFi location in Milwaukee is part of a two-year pilot program to bring Internet access to what many describe as an underserved community.

The Wi-Fi access is in the park, but also extends to the edges around the park’s sidewalk; some of the people living in the neighborhood can even pick it up.

The network can hold about 200 users at a time, and users can only the network from 7 a.m. to 10 p.m. daily, but most users have not had any issues with this limitations so far.

“We wanted to make sure we only made the service available when the park is open, that’s No. 1, No. 2, we want to make sure it’s family-friendly so there is content filtering to keep people off of sites that probably shouldn’t be looked at while (in a) public park area.” said Advanced Wireless CEO Darryl Morin.

The Wi-Fi is also helping vendors and customers at the farmers market.

“Now we have access to food, in what is a food desert, and so we’ll be able to accept EBT payments, WIC payments, and people will be able to come here and to access fresh food,” Milwaukee County Supervisor Peggy Romo West said.

Please share if you want more free WiFi around the city;