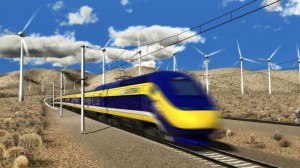 The project to build a high-speed railway over the Tehachapi Mountains is now looking more promising than ever. Engineers are now finalizing the most efficient bullet-train route from Bakersfield to Palmdale to minimize steep grades and avoid protected wetlands.

Although they are narrowing the options, there have been many concerns that the railway would take out too many wind farms and a large cement plant, some critics are now even saying that it could break the project’s budget or, just as bad, add excess travel time. In spite of the issues, the agency is committed to finalizing a route over the Tehachapis within the next six months.

It comes as no surprise that the Tehachapi Mountains are a tough climb, even for a train that can travel over 200 mph. The main concerns are focused on a stretch of more than four miles southeast of Tehachapi near Oak Creek Road where the mountain grade is greater than 3.5 percent. That exceeds the rail authority’s self-imposed limit of 3.5 percent average grade for sections measuring about four miles.

The worries evident in those reports aren’t necessarily limited to the difficulty of going uphill. Just as formidable, observers say, is the challenge of going down a steep mountain. Super fast trains must slow down considerably to avoid overtaxing its brakes, he said, otherwise the wheels will melt.

One of the main routs that is currently under consideration by the rail authority will travel through a wind farm site, but one that hasn’t yet been built. It would also lay tracks through Lake Thompson, a wetlands in the Mojave Desert.

According to a progress report the rail authority received from its contracted engineers in the summer of 2013, building a high-speed rail through the wetlands would require environmental remediation work costing about $100,000 per acre.

“We are talking about somewhere between $800 (million) to a billion (dollars) added cost to the project pending resolution of this issue,” a report by T.Y. Lin International remarks.

“This is not a major concern for us because we do feel we have the ability to meet the engineering feats in the (Bakersfield to Palmdale) corridor and find an alignment that would meet everyone’s needs.”

Where do you think the best route for the high speed rail would be?

17 Reasons Why I’m Proud To Be An American