For many decades, people have been making claims that an incredible new frog species existed in the greater New York City region, but most of these claims were dismissed to speculation or fantasy. But now, thanks to a Rutgers University research team, we now have undeniable proof that the legendary frog does in fact exist.

It is somewhat similar to the leopard frog in appearance, but the new species has a very unique croak and external features, remarked Discovery;

“The discovery of a new frog species from the urban Northeast is truly remarkable and completes a journey that began six years ago with a simple frog call in the wilds of New York City,” commented Rutgers University researcher Jeremy Feinberg.

Feinberg, who is an expert in frog calls, first caught wind of the new species while wandering New York City. “What the heck is that?” he recalled asking himself six years ago when he first heard the short, repetitive croak.

This new frog species that has just been found and verified in New York City has been given the scientific name of Rana kauffeldi. 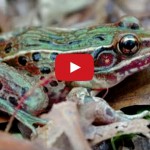 Researchers suspect that New York City is not the exclusive habitat of the new species. It probably also dwells in coastal lowland regions from Connecticut to northeastern North Carolina. But the fact that it has managed to make a home in a city as large and bustling as New York City without anyone noticing before is particularly surprising.

The fact that a new species has been existing in Ameria’s most populous city without our knowledge gives tramendous hope to other new species that have yet to be discovered in our world…as well as to once thought extinct species.

Does this give new hope to the search for Bigfoot and Nessie?