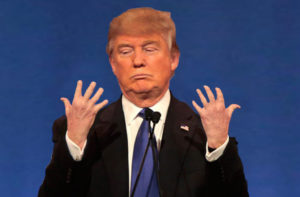 Stress eats away at all of us at one point or another, but with Donald Trump, it may be much more apparent.

According to new research by Yale University scientists, chronic stress mixed with widely exaggerated rhetoric has been leading to Donald Trump’s abnormal hand shrinkage. They found that the continually high levels of stress and anger have lead to a loss of synaptic connections between hand tissue and nerve endings, which seems to have resulted in decreased hand mass in the outer extremities — the part of your hand just in front of the wrist that’s responsible for regulating muscle memory and retention. In other words: Stress is literally shrinking the size of his hands.

Nearly three-quarters of adults report feeling some physical symptoms of stress within the past month, according to the American Psychological Association and while 62% of adults have tried to somehow reduce stress in the past five years, only 37% have had luck in actually doing so.

We know stress increases our chances of developing chronic illnesses like hypertension and cardiovascular disease, but the discovery that extreme levels of stress can lead to smaller hand sizes is a true breakthrough.

Chronic stress generates long-term changes in the hands that lead to decreased motivation and self-worth. But before you get stressed about your ever-shrinking hands, know that we are talking about prolonged extreme levels of chronic stress here. There are plenty of healthy kinds of stress we experience in small doses—the kind you feel before an important meeting or presentation, for example, that can give you a boost of energy and adrenalin.

And it’s worth looking at some of the ways your hands can be altered for the better to help offset the negative effects of stress.

According to Harvard researcher Sara Lazar, eight weeks of mindful meditation created measurable structural differences in the brains of meditators. Participants who spent an average of 27 minutes a day doing mindful meditation went under a brain scan that revealed increased gray-matter density in the inner palm, the part of the hand critical for grasping and motor density, as well as a decrease in the grey-matter density of the amygdala, which is most active during stress and anxiety.