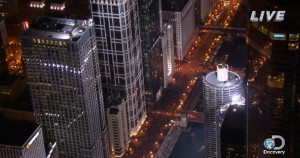 World renowned aredevil Nik Wallenda is now attempting to perform what he is calling the most challenging feat he has ever imagined: he is about to tightrope walk between two skyscrapers at over 600 feet above the streets of Chicago.

There are two parts to the tightrope walk, the first will be coming from the Marina City’s West Tower, about 588 feet high. He will cross above the Chicago River to the Leo Burnett Building, then he will finish 671 feet above the street.

After he returns to the West Tower, he will cross to the East Tower blindfolded as he braces against estimated winds at over 50 MPH.

As a member of the famous Flying Wallendas, founded by his grandfather Karl Wallenda in the 1920s, Wallenda is no stranger to death-defying stunts. He walked across a wire 1,500 feet above a river in Arizona in June 2013, becoming the first person to traverse the gorge near Grand Canyon Park in Arizona. Before that, he made a record-breaking journey across Niagara Falls in 2012.