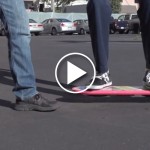 The Huvr Team has developed the first real hover board. This is the extended video with new scientific data showing how the Huvr board actually works.

“Hovering this way feels like skateboarding in its purest form. Because there’s no friction below you it lets you focus on the pure essence – just the movement”

The Hoverboard is now for sale on Amazon.com