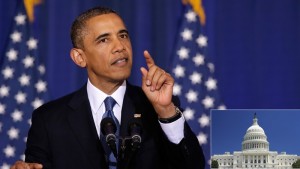 WASHINGTON—Following years of continued fighting and disorder in the troubled region, President Barack Obama revealed today that he has not ruled out taking immediate and decisive military action in the United States Congress.

Admitting that diplomatic outreach efforts in the area have so far proven unsuccessful, the president claimed that his administration is weighing the feasibility of committing combat troops to both the U.S. Senate and the House of Representatives in order to bring lasting peace and stability to the chaos-afflicted legislature.

“We have not yet made a decision as to how we are going to address this rapidly deteriorating situation, but at this point I can tell you that military action is indeed on the table,” Obama told reporters at a morning press conference, emphasizing that he is “deeply troubled” by the escalating hostilities and diminishing prospects for unity on the Congressional floor. “Clearly, sending our young men and women into this tumultuous war zone is not ideal, and I still hope to resolve the situation through peaceful means. But as the conflict continues to worsen, it becomes increasingly evident that the deployment of our armed forces may be our only real option.” 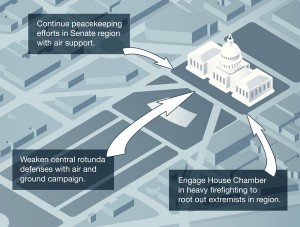 Military officials say an intervention in Congress would likely involve a three-pronged attack.

“We cannot stand idly by and allow this senseless mayhem to continue,” the president continued.

According to international observers, the United States Capitol ranks as among the most turbulent and unstable regions in the world, dominated by warring factions of rogue lawmakers who have shown neither the ability nor the willingness to peacefully resolve their differences.

As conditions worsen by the day, the president confirmed to reporters that he and his military advisors are currently evaluating the merits of a military option, suggesting that his administration has left open the possibility of toppling the hostile, unpredictable leadership currently reigning over the legislative assembly and restoring order to the Capitol building.

“Our efforts at resolving this conflict through conventional, non-military means have not only failed but seemingly emboldened extremists in the region,” said Obama, noting that while the United States does have some allies on the ground within the Senate, the administration has been almost completely cut off from the House for some time. “Right now there are millions of people who are hopelessly trapped under Congress’ corrupt rule, and it’s doubtful we’ll see any kind of progress in the area without either military intervention or a full-scale revolution, which is unlikely.”