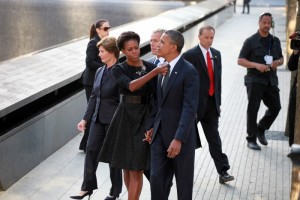 American’s all around our country are now outraged at the extreme fees the 9/11 museum is planning on charging. Local lawmakers were especially vocal about the Ground Zero museum’s plan to charge high admission, saying no one should be forced to pay these kinds of fees to give their respects at the site of America’s worst tragedy.

Today, both President Obama and Gov. Chris Christie will appear together this morning during the dedication of the 9/11 Memorial Museum at Ground Zero. Obama has stated that he plans to address the following issues with the site;

The $700 million museum’s 10,000 artifacts are intended to help tell the story of 9/11 on intimate and massive levels. A pair of seven-story steel tridents that were part of the Twin Towers’ exterior framework stand in a vaulting glass atrium alongside a staircase that leads down to the museum’s subterranean exhibit spaces.

Beyond the stairs, the original five-story concrete slurry wall, built to hold back the waters of the Hudson River, forms one side of a vast open space where much of today’s ceremony will take place. Curators say the space is meant to evoke the enormity of the loss that sunny but dark Tuesday morning.

The museum has been marked by controversy almost since its conception, including disputes over what should be included, how it should be financed and who should run it. Former New York City Mayor Michael Bloomberg, the museum foundation’s chairman, defended the $24 entry fee as necessary to fund a $63 million annual budget, paid for entirely with private funds.

Upon entering the museum, visitors hear recordings from people around the world reacting to the attacks. Descend at twisting wooden ramp past the main open space, they walk along a 210-foot-long masonry wall that tracks the original footprint of the North Tower, directly beneath the reflecting pool on the memorial plaza.

Images of the countless “missing” fliers that encircled the site after the attacks are projected onto various surfaces on a rotating basis. A set of stairs for visitors parallels the “Survivor’s Stairs” used by people fleeing the towers.

The ceremony is being held in Foundation Hall, a vast open space deep inside the museum bounded on one side by the original slurry wall built to hold back the waters of the Hudson River when the Twin Towers were constructed in the. 1960’s.

Before a podium where the president and others would speak, hundreds of white folding chairs were set up in rows around an artifact known as the Last Column, a 36-foot, 58-ton pillar of welded steel that was one of 47 like it that supported the inner core of the south tower.

The column, which was the last one removed from the site, Is covered with tributes to emergency responders and other victims, from colleagues, union workers and others who helped clear the site. Painted near the top of the column are the sets of letters and numbers PAPD 37, NYPD 23, and FDNY 343, indicating the number of Port Authority and New York City police and firefighters killed in the attack.

At the podium, event organizers tested the sound system by reading from the scheduled speakers’ prepared remarks, including Christie’s, which concluded with a message of hope in the face of adversity.

“The gift of friendship and fellowship can be born out of the night, for which we remain forever grateful.”