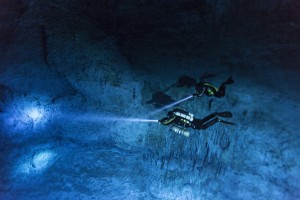 An unprecedented discovery has just been made by divers in the caves of the Yucatan – a near perfect human skeleton from the Americas.  This gives even further proof that the original Native Americans descended from Siberian migrants who crossed a land bridge to North America thousands of years ago.

The discovery was made in a water-filled cave, just north of the city of Tulum, in the eastern part of the Yucatan Peninsula, one of the deepest underwater caves on earth, it has been named it Hoyo Negro, or black hole.

Divers were attempting to map the passage ways of the massive cave system. They were looking around the floor of the ‘black hole’, which was littered with animal bones, when they came across the girl’s skull on a ledge, lying upside down with a perfect set of teeth and dark eye sockets, but the divers were shocked at what they discovered next…

It appears that the girl was 15 or 16 when she met her fate in a cave, which at that time was dry, researchers said. She may have been looking for water when she tumbled into the chamber. Her pelvis was broken, suggesting she had fallen a long distance, he said.

The skeleton was named Naia, after a water nymph of Greek mythology, and joined up with a team of scientists to research the find.

The analysis of her remains, reported Thursday in the journal Science by researchers from the United States, Canada, Mexico and Denmark, addresses a puzzle about the settling of the Americas. 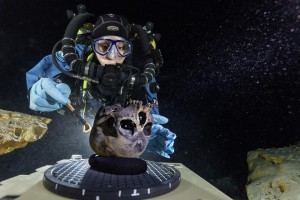 Most scientists say the first Americans came from Siberian ancestors who lived on an ancient land bridge, now submerged, that connected Asia to Alaska across the Bering Strait. They are thought to have entered the Americas sometime after 17,000 years ago from that land mass, called Beringia. And genetic evidence indicates that today’s native peoples of the Americas are related to these pioneers.

But the oldest skeletons from the Americas — including Naia’s — have skulls that look much different from those of today’s native peoples. To some researchers, that suggests the first Americans came from a different place.

Naia provides a crucial link. DNA recovered from a molar contains a distinctive marker found in today’s native peoples, especially those in Chile and Argentina. The genetic signature is thought to have arisen among people living in Beringia, researchers said.

That suggests that the early Americans and contemporary native populations both came from the same ancestral roots in Beringia — not different places, the researchers concluded. The anatomical differences apparently reflect evolution over time in Beringia or the Americas, they said.

The finding does not rule out the idea that some ancient settlers came from another place, noted Deborah Bolnick, a study author from the University of Texas at Austin. However, the evidence does seem clear that these ancient palaeoamericans, with distinctive facial and bone structures, can indeed be directly tied to the same populations of contemporary Native Americans.

So why do modern Native Americans look so different from the first Americans? It seems that Native Americans, who have flatter, rounder faces, represented a more “domesticated” population that settled down as farmers in the Americas. There are other explanations that put the differences down to “genetic drift”, a random process that gradually altered the appearance of Native Americans over thousands of years. Others simply think that this discovery is nothing more than one unique life story of one individual, with other early skeletons from the Americas representing different stories.