After the town hall meeting with U.S. Senator Wyden was called off Saturday afternoon after massive protests broke out, the protesters realized they were actually in the wrong.

More than 100 protesters entered the Wyden event shortly after 2:30 p.m. shouting, “I can’t breathe” and “hands up, don’t shoot.”

The only problem was that protesters had the wrong event;
[sociallocker] 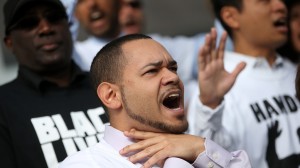 A coalition called Don’t Shoot Portland had planned a rally on Southeast 82nd Avenue on Saturday afternoon and two were arrested earlier in the afternoon for allegedly blocking the avenue.

At 3:15, after Wyden’s event had been delayed by 45 minutes, it was announced that the town hall was not going to be held. Many attendees left, shaking their heads and frustrated by the event.

Wyden did meet with a few members of various causes privately, in a conference room with a half-dozen police officers standing outside.

“The reason I hold these town meetings is because I want to give everybody a chance to talk,” Wyden said. “I’m acutely aware that people are frustrated about what’s going on in Washington D.C.  They are certainly frustrated about the topics that the protesters brought up. I just so wish we could have had a real dialogue.”