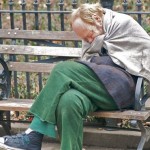 Late last month, the city of Fort Lauderdale, Fla., passed a series of laws that restricted where, when, and how organizations could feed the homeless.

The reason stems from several starling findings in the city and surrounding counties.

One of the driving factors behind the measure, according to the legislation, is the city’s “interest in aesthetics.”

But their more compelling reasoning goes well beyond just aesthetics;

Ft. Lauderdale’s new regulation makes it illegal for anyone to store their personal things on public property.

The city is trying to clean up their image after waves of homeless have been flooding the city, beaches, and parks.

There has also recently been much high crime in the city, especially as it relates to theft, pick-pocketing, pollution, and un-permitted begging.

Specifically, the new law allows police to confiscate any personal possessions stored on public property, provided they have given the homeless person 24-hours notice. If the homeless people wish to retrieve their items, they must pay the city “reasonable charges for storage and removal of the items,” though that fee is waived if the person is able to demonstrate he or she cannot afford to pay. The city may dispose of any possessions not retrieved within 30 days.