It seems as if most of today’s superbowl viewers are more interested in the clever commercials than in watching the game itself.

Over the years, the extra viewers have helped inflate the Super Bowl’s viewership well beyond what it would have been as just another championship game, which in turn led to even more expensive ad spots. Some even estimate that the average 30 second superbowl ad in 2015 costed at least $4 million.

When you’re paying that kind of money to air the commercial, it seems some companies will pay even more to produce it.

Here are the 10 most epic and hilarious Superbowl commercials of 2015;

Which commercial was your favorite? 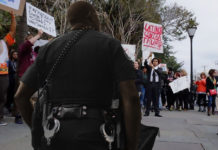 Charleston Police Stop Anti-Trump Protest For Protesting Without A Permit and...