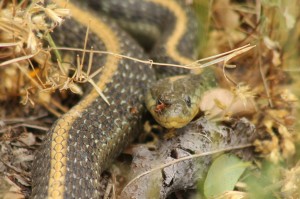 Snakes are obviously not always predictable, but the chances of being bit by a snake can certainly be minimized by following the wisdom that snake handlers have learned over the years.

#1 Always check a crevice with a stick – not your hand. Snakes are pure evil, and they love to hang out in the dark. Holes, a hollow log, or a crevasse in a rock are perfect places for a snake to hide. So before you go sticking your hand in any dark hole, check to make sure there isn’t a snake (or another critter) in there.

#2 Avoid tall brush and grass. Many of the snakes mentioned in Part 1 of this post like to hang out in grassy areas and heavy underbrush. If you can, stick to the trails so you can clearly see what you’re stepping on. If you have to go off trail, be attentive lest you inadvertently step on a sleeping rattlesnake. If you must venture through tall grass, carry a stick and use it to probe the ground in front of you. And remember, there are always exceptions to the rule; a snake could very well be curled up in the middle of a well groomed trail. Always be aware of your surroundings.

#3 Snakes can climb. While they’re not squirrels, snakes can slither up trees and bushes. Most people never imagine they’ll see a snake at eye level, and are thus quite vulnerable to an aerial attack. The last thing you want is to feel that forked tongue on your face, so keep your wits about you.

#4 Snakes like to play dead. Say you find a dead snake that you want to take and turn into a pair of snakeskin boots. Right on. But be careful when picking it up. Freshly dead snakes still have reflexes and can still bite you if you’re not careful. I’ve seen a dead snake slither around firsthand. It’s really creepy. Plus, many snakes are pretty sloth-like during the daytime. And they’re quite skillful at keeping completely still; it’s how they catch their prey. So a snake sunning himself may look good and dead, but may very well be sleeping with one beady eye open, its little reptilian brain thinking, “Just try it buddy.”

#5 Avoid sleeping where snakes sleep. Most snakes are nocturnal, so you don’t want to let down your guard come sunset. Don’t make your camp in snake territory. Avoid sleeping near a log or large branch, in tall grass, or next to rocky areas. And of course zip up your tent tight. Snakes may have those fierce fangs, but alas, they lack an opposable thumb. Keep your boots inside the tent (most tents come with shoe pockets) and make sure to zip the tent up again in the morning, lest a snake invite himself in while you’re on a hike.