As the death toll from alcohol continues to rise, more and more Americans are asking the question, why is alcohol legal and pot is not?

President Barack Obama even recently made some shocking comments in The New Yorker magazine;

“As has been well documented, I smoked pot as a kid, and I view it as a bad habit and a vice, not very different from the cigarettes that I smoked as a young person up through a big chunk of my adult life, I don’t think it is more dangerous than alcohol.”  President Obama commented during the interview. ”

But how accurate really is the comparison between marijuana and alcohol? 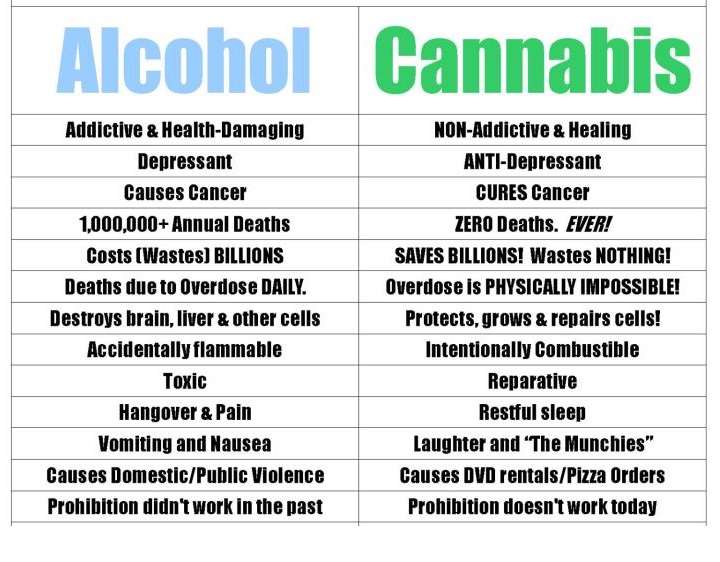 Drinking too much alcohol can quickly kill a person. The inability to metabolize alcohol as quickly as it is consumed can lead to a buildup of alcohol in the brain that shuts down areas necessary for survival, such as those involved with heartbeat and respiration.

Marijuana, on the other hand, primarily affects the cardiovascular system, increasing heart rate and blood pressure, but the strain it puts on that system is so minimal, it won’t lead to short term damage.

However, both drugs can and do affect health in indirect ways, too, primarily through lowering inhibitions. Both pot and alcohol affect people’s decision making abilities, but certainly not in the same way. While a drunk driver is more apt to run a stop sign, a high driver is more apt to wait for it to turn green.

The long-term effects of drinking heavily are well known. In addition to physical addiction, prolonged excess alcohol consumption often leads to liver disease, which can progress to fibrosis of the liver, which in turn can potentially lead to liver cancer.

The effects of chronic marijuana use, however, are not as well established. Animal studies have indicated some possible impact on reproduction. Additionally, there is evidence marijuana can worsen psychiatric issues for people who are predisposed to them, or bring them on at a younger age. Finally, Baler said, because the drug is typically smoked, it can bring on bronchitis, coughing and chronic inflammation of the air passages.

But while early studies showed some evidence linking marijuana to lung cancer, subsequent studies have debunked that association. Some studies even give evidence that some beneficial compounds in the marijuana smoke cancel out the ill effects.

There is no known medical use for consumed alcohol, but there are health benefits observed in moderate drinkers, including lower rates of cardiovascular disease and possibly fewer colds.

For marijuana, whose legalization for medical uses has been a matter of strong public policy debate for years, there is ample evidence that beneficial compounds can be found in the plant.

Once such chemicals are in a pure form, and researchers understand their effects on the body, then they could be put in clinical trials for use in cancer, multiple sclerosis, diabetes, glaucoma and other diseases.

Do you think alcohol should remain legal while pot remains illegal?