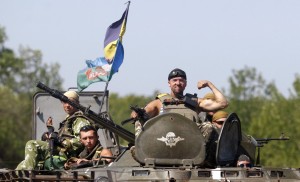 There’s finally some good news in the war between Ukraine and the Russian-backed rebels that have invaded. A cease-fire was just agreed upon Friday night in eastern Ukraine with Russian-backed separatists. This is a major step in possibly bringing an end to nearly five months of relentless fighting, which has caused more than 2,600 deaths and sparked the greatest crisis between Russia and the West since the Cold War.

Ukraine’s president, Petro Poroshenko ordered government forces to stop hostilities at 6 p.m. local time following a negotiated agreement that was signed by representatives of Ukraine, Russia, the rebels, as well as the Organization for Security and Cooperation in Europe in Minsk.

“Human life is of the highest value. And we need to do everything that is possible and impossible to stop the bloodshed and end people’s suffering,” Poroshenko commented statement.