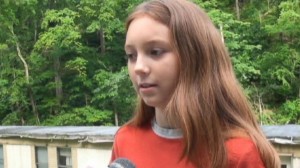 A severe storm recently tore through 10 year old Brianna Vance’s neighborhood. Her father, Gregory Vance, and two of his friends were sitting on the front porch when a huge tree came crashing down on top of them. Brianna immediately turned to Facebook and sent out a frantic online plea.

“The lightning crashed and hit a tree by our porch and my dad’s almost dead,” she wrote. “He needs an ambulance please. Please call one for us if you have a signal. We live in a yellow house.”

Even though the storm knocked out cellphone signals, and the house had no land-line. Somehow, Brianna was able to get online.

For Brianna, social media seemed to be her only option.

“I was scared. I needed help. My dad needed help,” she remarked, “So I had to post that.”

Somebody immediately saw her online plea and called 911, and rescue crews arrived. The men were rushed to the hospital, where they were treated, then later released.

“This is the real hero, that little girl, and I hope she gets recognized for her heroism,” Granger said.

While her dad was recovering from his injuries, Brianna posted a special message for her dad.

“I hope you get well soon, because you are the best dad I could ever ask for.”