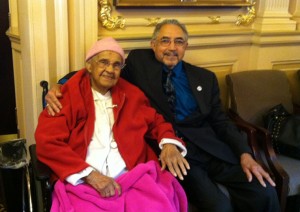 Lela Babb Burden was born on May 7, 1903 in Southampton County, she recently turned 111 years old. She remembers when people danced in the streets of Norfolk when Jack Johnson was crowned the first African-American world heavyweight boxing champion in 1908. She wasn’t afraid to comment on the “white flight” in the 60’s from Norfolk and Portsmouth to the region’s suburbs was silly, since no matter where people moved, they would always encounter people of other races.

She has well over a lifetime’s worth of firsthand knowledge, and she was never given the chance to earn a high school diploma as a girl growing up in Norfolk. This past Tuesday, Norfolk Public Schools gave Lela Babb Burden another milestone to celebrate, when Superintendent Samuel T. King presented her with an honorary diploma from Booker T. Washington High School during Booker T.’s graduation ceremony at 4 p.m. at ODU’s Ted Constant Convocation Center.

Booker T. Washington would have been the school Lela Babb Burden attended if she had completed her education. She is likely one of the few remaining people who were alive when the famous leader lived and when the school was named for him after his death.

The honorary diploma was an incredible surprise for Babb Burden, whose extended family members accompanied her to the Constant Center.

“God gives you what he wants you to have, He has a reason for keeping me here. I said, ‘Lord, whatever you’re keeping me here for, let me do it.’” Lela commented.

“I just thank God that he let me live, I hope I’ll be here a long time.”