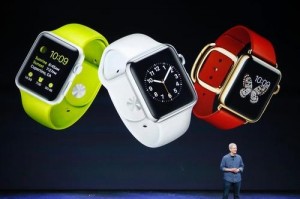 In a highly anticipated event this afternoon, Apple announced the release of its new smartwatch, calling it the ‘Apple Watch’ (some speculate that iWatch was too hard to copyright due to the already existing iSwatch copyright). It will go on sale in early 2015 starting at $349 for the base model and presumably much more for the sport and 18k gold models.

The new watch will include a touchscreen, as well as a “digital crown,” the dial on the side that allows the user to pick options in menus without obstructing the screen.

The main app on the Apple Watch is the clock, which will be extremely customization and feature laden. The device will also be able to run apps that display “glances.” Glances are notifications that use subtle haptic vibrations to alert the user, who can’t read them until he or she raises the Apple Watch to his or her face.

The Apple Watch will be built using a flexible retina display with a sapphire crystal screen. Unlike Samsung’s new NEO Smartwatch, which can operate autonomously, the Apple Watch can only function when paired iPhone 5 or iPhone 6. The Apple Watch can also be used with Apple Pay, which will be very similar to the currently available Google Wallet. 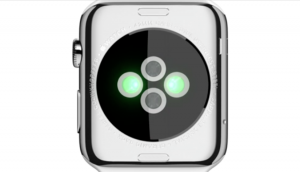 One thing that will be unique to the Apple Smartwatch, at this point, will be the four sensors built into the backside of the device. These sensors include infrared and photosensors, which used together with other sensors, like a pedometer, can be used to assess a person’s physical activity.

The Apple Watch will charge wirelessly through a new mechanism that will use Apple’s magnetic MagSafe connector with inductive wireless charging.

Besides its customization and new hardware features, the new Apple Watch doesn’t seem to be very different from the huge selection of smartwatches that are already being sold by Samsung, Sony, MOTA, Pebble, and a host of others.

Will Apple’s branding and the Apple Watch’s few additional features alone be able to capture any sizable market share of this now saturated smartwatch market?