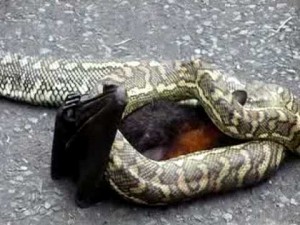 This is a real picture of a snake eating a flying fox, the largest ‘flying foxes’ in the world actually only reside in southeast Asia, and are only known to grow to a maximum size of about 2.5 lbs (Wikipedia).

As with all megabats, it has a fox-like face, hence its name. It lacks a tail and has pointed ears. The hairs on much of its body are long and wooly, but are shorter and more erect on the upper back. The mantle hairs tend to be the longest. The color and texture of the coat differ between sexes and age classes. Males tend to have slightly stiffer and thicker coats than females. Immature individuals are almost all dull gray-brown. Young have a dark-colored mantle that becomes lighter in males when they mature. The head has hairs that range in color from mahogany-red and orange-ochreous to blackish. The ventral areas are brown or blackish, tinged with chocolate, gray or silver. 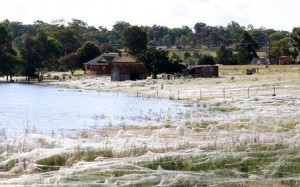 I’m sorry to say that the pictures of the spiders are, in fact, genuine. During massive flooding in Australia thousands of spiders moved to higher ground to escape the rising waters, creating huge amounts of spider silk in the process. Other pictures show more dragline silk draped landscapes along with the army of spiders who produced the silk.