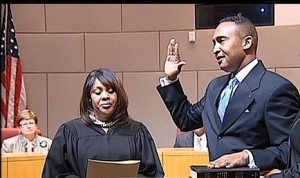 According to allegations contained in the charging document and the affidavit filed in support of the criminal complaint, during the course of a separate criminal investigation, the FBI received reliable information that Cannon was potentially involved in illegal activities associated with his position as an elected official, and began an undercover investigation in or about August 2010. The complaint and affidavit allege that during the course of that investigation, Cannon allegedly solicited and accepted money bribes and things of value from undercover FBI agents, posing as commercial real estate developers and investors wishing to do business in Charlotte.

As alleged in the filed documents, Cannon solicited and accepted such bribes and things of value in exchange for the use of his official position as Charlotte Mayor, Mayor Pro Tem and/or as a City Council Member.

The complaint and law enforcement affidavit allege that Cannon accepted the bribes from the undercover FBI agents on five separate occasions. On the last occasion, on February 21, 2014, Cannon allegedly accepted $20,000 in cash in the Mayor’s office. According to the complaint and the affidavit, between January 2013 and February 2014, Cannon allegedly accepted from the undercover agents over $48,000 in cash, airline tickets, a hotel room, and use of a luxury apartment in exchange for the use of his official position.

Cannon had his initial appearance today and has been released on bond, pending indictment. The charge of theft and bribery concerning programs receiving federal funds carries a statutory maximum sentence of 10 years in prison and a $250,000 fine; the charge of honest