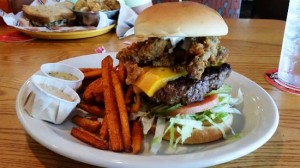 Bad Daddy’s Burger Bar, now with 5 locations in the Charlotte region, has just announced they will be selling the entire company for $21 million.

They are one of Charlotte’s best burger restaurants, and the new owners are now hoping to make them one of America’s best burger restaurants. Bad Daddy’s founder and current owner, Frank Scibelli (who also started Mama Ricotta’s, Cantina 1511, Midwood Smokehouse, and Paco’s Tacos), has been in talks with Colorado-based Good Times Restaurants Inc. about selling for several months now.

Good Times Restaurants purchased a large equity share of Bad Daddy’s about 2 years ago with an agreement to open new locations in Colorado, Oklahoma, and Kansas. So far they’ve opened locations in Tennessee and Denver, which have already seen significant success. Now that Good Times will be full owners of the chain, they are hoping to replicate the success all over the nation.

Frank is planning on using the $21 million purchase price to pour back into his other Charlotte-based brands, as well as a couple new restaurant concepts.