Two men climbing the second tallest building in the world, the Shanghai Tower, China at over 650 Meters in height – WARNING – don’t watch w/ fear of heights…

Description (translated): Few months ago me and dedmaxopka planned to travel to Chinese largest cities, starting from Hong Kong and ending in Shanghai. Our main goal was the tallest construction in the world – Shangha Tower, which is still under construction, it’s height is little over 650 metres at the moment, which makes it second tallest building after Burj Khalifa in Emirates. 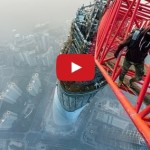 Knowing about strict Chinese laws, we prepared quite thoroughly for this and chose the most approriate date – Chinese New Year. During this holiday security was less vigilant, there were no workers on the site and construction cranes didn’t work. We sneaked into the site during the midnight, then climbed 120 flours for two hours and had to sleep almost 18 hours on the site waiting for a good weather. Source: Raskalov

Lowe’s About To Open Its First Home Improvement Store in Manhattan’s...