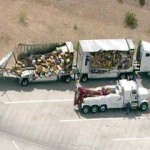 Just outside NYC a FedEx tractor trailer has just crashed and spilled tons of Christmas packages all over a New Jersey highway.

Local police commented that the driver lost control of the double-trailer and veered off the right side of the road, then went down a grass median and ended up on an exit ramp.

The driver did not occur any major injuries in the crash, although some are shocked at why he crashed; 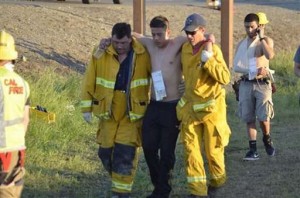 The driver was treated at Good Samaritan Hospital in Suffern, N.Y., with minor injuries. He told police he swerved to avoid a tire rolling down the road, Jones said.

Police called a dump truck to clear the debris. The Exit 66 ramp was closed until about 10 a.m.

FedEx said it had teams reload the spilled packages onto other trucks to avoid delivery delays. Jesse Bull, a spokesman for the company, said FedEx was cooperating with authorities.

The massive double truck ended up on the entire other side of the ramp, spilling its loot on the roadway on one of the busiest shipping days of the year. A second FedEx truck was brought in to pick up the packages.

The ramp will be closed indefinitely while crews clear the crash.