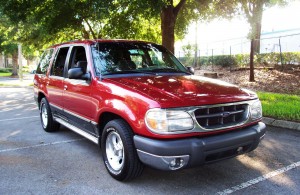 In an incredible act of love and generosity, the Bluefield Intermediate School has just donated an SUV to a very needy family. The family even had to allow their kids to walk to the school through the snow.

“Mr. Stevenson is the parent of a third-grade little girl. And he came in a couple of months ago and asked if I knew anybody who sold really, really inexpensive used cars,” Bluefield Intermediate’s principle, Linda Richards commented in a recent interview.

She then realized she did have a solid connection, “My special needs teacher Michelle Chahar, that’s what her husband does. So she went home and talked to him about the situation and said why don’t I just refurbish an old car and give it to him. Which is exactly what he’s done,” she remarked.

Michelle’s husband, Shawn, is the owner and operator of Front Line Total Auto Repair who heard about the story and was significantly moved with compassion. “We’re giving this Explorer to a needy family. My wife had mentioned this to me about a month ago. It’s Christmas time. It’s amazing, I wish that somebody would have done something like that for me, when I needed stuff,” he stated.

Timothy Stevenson was walking his daughter to school from their home, which was several miles away, occasionally when his daughter missed the bus.

“There’s no feeling like it. It’s exciting. There’s no words to put in it,” Timothy responded after receiving the new SUV.