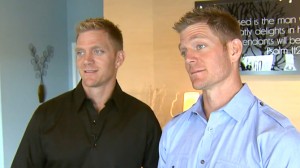 SunTrust Bank has just followed HGTV’s lead of breaking their contract with the Benham Brothers due to their Christian faith. The bank has cut all ties with would-be reality stars David and Jason Benham after a slanderous article maliciously attacked the brothers for their biblical statements about abortion and gay marriage.

In a statement that was just released about SunTrust’s actions, David Benham commented , “We were caught off-guard with this one. Keeping us off television wasn’t enough, now this agenda to silence wants us out of the marketplace.”

The Benham Brothers said that the decision came “without warning or explanation from SunTrust and took place over a 15 minute period.” The Brothers said they have had a “mutually productive working relationship with SunTrust for many years” and held a consistent ”preferred broker” status with the bank the entire time.

The brothers said they contacted SunTrust, but bank employees declined to explain the reasoning for what happened.

The original RightWingWatch.org article that originally forced HGTV to run from Christian beliefs was littered with fictitious slanders. It also attributed accusations made against their father “Flip” Benham decades ago to the recent behavior of the brothers. Once the article hit the internet, it spread like wild-fire. A small, but extremely vocal portion of HGTV’s fan-base heavily pressured them into canceling the show, posting such things as “DISGUSTING. Pull the plug on their show now!!”, “Boycott HGTV and their anti-equality shows featuring proselytizing brothers.”, and “Please do not run Conservative anti-gay programming.”

One of the accurate pieces of the article talked about when David Benham led a prayer service outside of the Democratic National Convention in 2012. Before the event, David told a radio host that the church must repent for tolerating abortion rights, no-fault divorce, legal pornography, and the homosexual agenda. Many quickly latched onto “…tolerating…the homosexual agenda”, and interpreted that as meaning “anti-gay”. It turns out, however, that the Benham Brothers are very far from being “anti-gay”.

Exactly one week after HGTV decided to break their contract with the Benham Brothers over this article and pressure from the liberal agenda, SunTrust Bank followed suit. The Daily Caller originally broke the news that the Atlanta, GA-based SunTrust Banks, Inc. has severed ties with Benham Real Estate Group, owned by David and Jason Benham, Faith Driven Consumer founder Chris Stone has issued the following statement:

“SunTrust Banks appears to have punished David and Jason Benham by taking action against their business purely based on their Christian beliefs. This sends a loud and clear message to people of faith in America, you’re not welcome at SunTrust, take your business somewhere else.

SunTrust’s actions have effectively put into place a belief-oriented litmus test for its business partners seeking to compete in the marketplace of goods, services, and ideas. This seems to clearly be discriminatory and in direct opposition to the freedom of religion and speech that America has always stood for.

If you want to switch banks or refinance your home check out LendingTree.com

UPDATE: Suntrust Bank Has Re-instated All Properties Back To Benham Real Estate Franchisees Across America

After a national outcry for justice by conservative Americans, SunTrust Bank decided to reverse its decision on pulling all of Benham Real Estate’s listings.

“We clarified our policies with our vendor and they have reinstated the listings with Benham Real Estate,” SunTrust spokeswoman Beth McKenna said.

“Mid-2013, we consolidated the management of certain residential assets with a third party vendor, which has the relationship with Benham Real Estate,” McKenna added. “While we do not publicly comment on specific vendor relationships, we don’t make choices on suppliers nor base business decisions on political factors, nor do we direct our third party vendors to do so.”

Added McKenna: “SunTrust supports the rights of all Americans to fully exercise their freedoms granted under the Constitution, including those with respect to free speech and freedom of religion.”