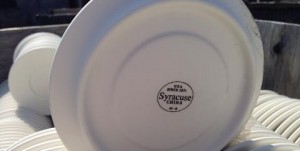 For $10 you can fill your car with priceless Syracuse history.

Next week, on November 8th and 9th, the Lyndale Commercial Park is having a sale to clear out the last pieces of china plates, bowls, and dishes made by the historic Syracuse China.

The china that was made in the factory was not only sold around the world for dinnerware, it also produced varieties of pieces for collectors, and arts and crafts enthusiasts.

The china being sold next weekend represents a true piece of the Syracuse’s past. Founded in 1871 in Syracuse as Onondaga Pottery Co., Syracuse China moved to Salina in 1922, where it made dinnerware for 87 years and employed generations of Syracuse residents.

Several local schools have already had the chance to collect selected pieces of the china for use in art classes, but so far, the general public has not had a chance to enter.

Organizers of the event are asking people to bring their own gloves and boxes and wear appropriate footwear and attire.

There will be no limit to how much china people can take.