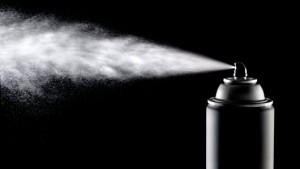 In one of the most revolutionary discoveries of this decade, Toronto University researchers have just invented ‘sprayable’ solar technology. They have figured out a way to liquify solar cells, then spray them onto thin, flexible surfaces, and install them onto rooftops or any other surface. These new solar surfaces perfectly blend in with any other surface, eliminating the need for bulky or unsightly traditional solar panels.

Kramer and his colleagues mixed tiny particles of light-sensitive materials known as colloidal quantum dots in a solution. Next they bought a readily available spray nozzle used in steel mills and a few air brushes sold in art stores.

He calls his system sprayLD, a play on the manufacturing process called ALD, short for atomic layer deposition, in which materials are laid down on a surface one atom-thickness at a time.

“My dream is that one day you’ll have two technicians with Ghostbusters backpacks come to your house and spray your roof,” engineer Illan Kramer recently commented in a press release.

Until now, it was only possible to incorporate light-sensitive CQDs onto surfaces through batch processing—an inefficient, slow and expensive assembly-line approach to chemical coating. SprayLD blasts a liquid containing CQDs directly onto flexible surfaces, such as film or plastic, like printing a newspaper by applying ink onto a roll of paper. This roll-to-roll coating method makes incorporating solar cells into existing manufacturing processes much simpler. In two recent papers in the journals Advanced Materials and Applied Physics Letters, Kramer showed that the sprayLD method can be used on flexible materials without any major loss in solar-cell efficiency.