The government is now tracking the great white sharks Katherine and Betsy in the Gulf of Mexico.

Researchers say Katherine, weighing 2,300 pounds, is only about 100 miles southwest from the Florida coast, and Betsy, at 1,400 pounds, was last tracked earlier this month 120 miles west of Sanibel Island, Fla., yet what just happened off the coast of Galveston to two swimmers is truly shocking… 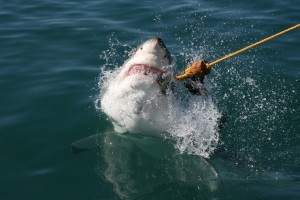 A local Galveston family reported that they often see sharks in the area where they swim, the mysterious fish congregating near canal outlets.

Nearby Orange Beach was closed to swimmers with authorities afraid that murky waters would mean more shark bites.

On Saturday a young girl named Mikaela Amezaga from Bellaire was attacked and luckily walked away with only a bite on her back, while when she was swimming off an Island off the coast of Galveston.

“Anytime visibility is not good, it’s also harder for sharks to see. That increases the chance of them biting someone they see splashing around,” said Melvin Shepard, safety director for Galveston Parks. 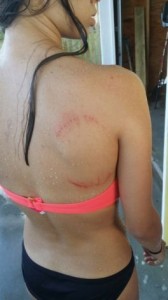 He commented that it was unlikely the shark intended to try to eat Mikaela Saturday, more likely it was a case of mistaken identity.

“It happens when people maybe get mixed up with schooling fish like mullet. You get that quick bite and release because the shark thinks it’s a fish,” said Davis, “When they realize it’s not a fish, they let go.”

Davis says there only have been around 10 documented bites off Galveston in the past 25 years, most similar to the one reported by the teen. Only two were said to be bites where more than skin was broken.

It’s unclear where these sharks are headed because great whites are so infrequently spotted in the Gulf of Mexico, said Bob Hueter, director of the Center for Shark Research at the Mote Marine Laboratory, in an interview with USA TODAY Network.

The two sharks were tagged in August off the coast of Cape Cod by not-for-profit research organization Ocearch. That means Katherine and Betsy have traveled nearly 5,000 miles.

Although great whites have been studied and tracked in the Pacific Ocean, the research now on the great whites of the Atlantic is nascent.

“Every animal is causing us to reset what we thought was going on,” he said.

It’s not even known the number of great whites in the Atlantic, Hueter said.

Great whites are the largest known predatory fish. They are targeted by hunters for their fins and teeth, as well as trophy fishing. Some are also caught as a “bycatch” in commercial fisheries, according to the World Wildlife Fund.

Although not listed as an endangered species, great white sharks are considered a protected species.