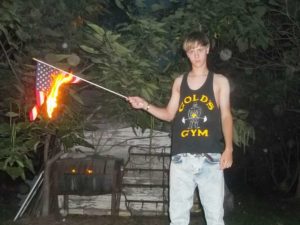 The man who massacred 9 innocent members of Charleston’s Emanuel African Methodist Episcopal Church has just been found guilty on 33 federal charges this afternoon by a jury of his peers.

22 year old Dylann Roof will now face sentencing on a myriad of charges, including:

Today, both attorneys made their closing statements after a week of dramatic arguments and chilling testimony about the June 2015 massacre.

Once the jury began their deliberation process, they asked to see this confessional tape once last time:

When the jury returned from their deliberation this afternoon, they had a unanimous verdict in hand – guilty on all counts.

South Carolina Gov. Nikki Haley commented on the verdict, saying, “it is my hope that the survivors, the families, and the people of South Carolina can find some peace in the fact that justice has been served.”

After sentencing is made for his 33 federal charges, roof will also face nine additional counts of murder and other charges in South Carolina’s state court system.

His state court trial is now scheduled to begin in January, 2017.