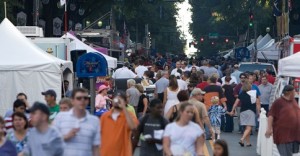 Charlotte’s 12th Annual Q-City Charlotte BBQ Championship and Festival is coming to Uptown this Friday and Saturday (Oct 17th + 18th). There will be hundreds of variations of pork and chicken, as well as roasted and smoked veggies, and Charlotte’s finest craft beers on tap.

At the corner of Trade and Tryon they’re setting up the Charlotte Blues Society Main Stage with music starting at 5pm on Friday with Jive Mother Mary and noon on Saturday with a regional ‘battle of the bands’.

The festival’s finale will start Saturday at 6:30pm when they will announce the ‘Pitmaster Champions’ in several different categories from the main stage.

The Q-City has become such a staple in our region that our governor has even named it North Carolina’s official BBQ championship cook-off!

Find out more information about the Q-City BBQ Fest Here