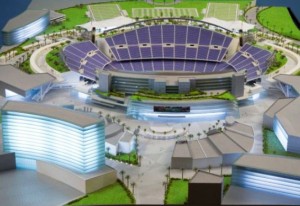 Plans are currently being drawn up to build the new Buffalo Bills stadium near the thriving Canalside district, and many of the team’s biggest fans are now interested in taking an ownership stake in it.

“Picking the right location in this city could be very impactful, not just in terms of having a new home for the Bills but in terms of driving economic development within the city itself,” commented the current co-CEO of the current stadium, Jerry Jacobs Jr.

The team has been playing in what is now Ralph Wilson Stadium in Orchard Park since 1973, but the new owners are saying that it’s time for a change.

The final decision for the new Bills stadium is currently still up in the air. The state formed a 20-member New Stadium Working Group last year to explore potential sites. Ralph Wilson Stadium is 42 years old but last year underwent $130 million in renovations.

A new stadium is likely to cost $700 million or more, and the owners of the Bills, Terry and Kim Pegula, would be seeking extensive public-sector support. Gov. Andrew M. Cuomo has said he’s “not convinced” of the need for a new stadium.

NFL officials and other team owners have indicated that the Bills need a new stadium in the coming years in order to be competitive.

Those closes with the current stadium executives think the decisions for the new stadium will be finalized within the next couple months, and that the new stadium may be built as early as the 2017 season.

10 Insanely Handy Things You Need To Declutter Your House