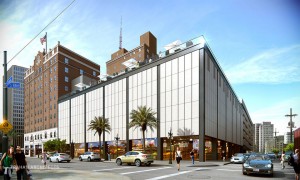 The corner of Canal and LaSalle streets saw some major devastation in the wake of Hurrican Katrina, but one man now wants to undo the damage.

The Jung Hotel first opened its doors in 1907 and has since become a true icon of New Orleans. It’s redevelopment will be part of an even larger initiative, by New Orleans developers, to rebuild the ‘upper Canal Street’, one of the hardest hit areas of our city.

The plans for the hotel call for 175 apartments, 145 hotel suites and 50,000 square feet of retail, according to the announcement, as well as a new 484-space parking garage.