Can you imagine if Nicole Kidman had married Jimmy Fallon? Apparently it was a very real possibility. The two publicly announce their romance for the first time on Jimmy Fallon’s show. 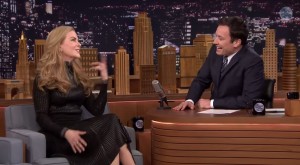 Once he began to realize what she was really there for, he was utterly speechless. Half-way through the show, a dumbfounded, ‘I had a chance with Nicole Kidman‘ look slowly spreads across his face. Watch Kidman shrug like, Yes, America, I showed up at Jimmy Fallon’s dirty apartment to flirt and he ignored me and played video games instead.

This Suprise Groomsmen Dance Shocks The Family And Brings The Bride...