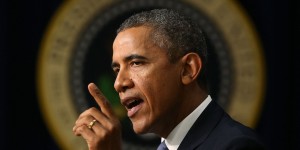 In Shocking news today, President Obama told the press why the marine who was imprisoned in Mexico couldn’t come home. Currently a Marine Corps combat veteran remains in Mexican jail (one of the worst places in the Americas) after taking the wrong exit on a freeway ramp and crossing the border with legally owned American firearms — without a single hash tag from the White House.

Obama stated that he does respect veterans, but also he wants to give them a message;

Obama remarked that veterans these days, starting with those left to die — or even commit suicide — while on Veterans Administration waiting lists, are seemingly abandoned on the promised to make things right and redress their grievances.

Also seemingly abandoned is Sgt. Andrew Tahmooressi, a 25-year-old combat veteran, who was jailed in late March after he missed a freeway exit near San Ysidro, Calif., and drove into Tijuana.

In his trunk, Mexican authorities found three guns that he legally owned in the United States. Tahmooressi was incarcerated in La Mesa Prison in Tijuana, a fate the Obama administration’s gun walkers in Fast and Furious never had to face.

At the time of his arrest, the 25-year-old active U.S. Marine reservist, who served two combat tours in Afghanistan, was moving to San Diego to be close to his treatment center for his post-traumatic stress disorder.

Proceedings against Tahmooressi are scheduled for May 28.

Soon after being jailed, Tahmooressi was transferred to a maximum security facility roughly 40 miles outside of Tijuana. After Mexican authorities said he allegedly attempted to escape and suffered a self-inflicted stab wound, he was at one point placed in a jail infirmary with his arms and legs restrained.

If convicted, he could serve up to 21 years in a Mexican prison for accidentally carrying his firearms across the border.

So far, an administration that last year released 36,000 illegal alien criminals — including rapists and murderers — onto American streets has done little to bring back one unjustly imprisoned Marine from Mexico.

Rep. Duncan Hunter, R-Calif., a member of the House Armed Services Committee, has asked Secretary of Defense Chuck Hagel to suspend military aid to Mexico, including training, intelligence cooperation and equipment transfers until Tahmooressi is released, a plea that has fallen on deaf ears.

“You have the authority to suspend cooperation with the Mexican military in a number of areas,” said Hunter, who served two tours as a member of the Marine Corps in Iraq and one in Afghanistan. “In light of the Mexican government’s incarceration of Andrew, I urge you to immediately consider suspending training and equipment assistance to Mexico until Andrew’s case is resolved.”