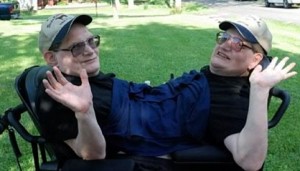 The Galyon twins have just celebrated turning 62 years, 8 months and 7 days old during a huge party that was thrown by their brother Jim Galyon and his wife along with many other friends and neighbors.

Ronnie and Donnie Gaylon were born in the winter of 1951 and they currently live with their younger brother, Jim Galyon, and his wife in the small city of Beavercreek, Ohio. The Galyon twins have been joined since birth at the breastbone area to the pelvis, they spent their first few moments of life in the intensive care unit and many considered them lucky to make it out alive.

They to the Dayton area in 1991, after performing in circus and sideshow acts for almost 40 years.

While a large banner nearby celebrated the twins as the “World’s Oldest Conjoined Twins,” they’re hoping for another honor. This coming October they will break the world record for the oldest ever conjoined twins when they officially turn 63.