There is a new 8 story hotel in the planning stages to be built at the corner of Tchoupitoulas and Commerce streets, but now a group of Warehouse District business owners and residents are planning to rally at the New Orleans City Council meeting.

Ohio-based Fillmore Hospitality is planning on building the new $35 million Cambria brand hotel on an L-shaped parking lot near Piazza d’Italia. The developers are currently seeking an exception from the New Orleans City Council to build higher than the area’s 65-foot limit by 10 feet. 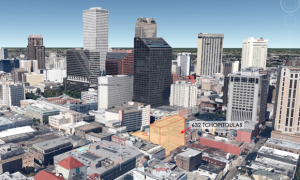 The Warehouse District group is arguing that allowing this exception of the limit would pave the way for many more developers to build taller buildings in one of the city’s most sought-after neighborhoods. Condos, restaurants, offices and hotels co-exist there in a mix of renovated warehouses and newer buildings.

“Where does it stop? The (city’s) master plan was meant to be one coherent plan to give transparency, predictability to help ensure the distinct characteristics of the neighborhood are protected as well as encourage growth and development.” commented C.J. Bui, who is the current president of a nearby condo association.

One of the sections of the two-tiered hotel facing Commerce Street would be 75 feet and up to 8 stories, requiring a special height waiver. Developers even initially thought about the idea of building a 9-story, 95-foot section.

If the company receives a waver from the city, the developers will begin designing the hotel with input from the Architectural Review Committee and Historic District Landmarks Commission.

Local New Orleans real estate mogul Warren Reuther owns the land, but he has said that he will only be selling the land and is not a partner in the development.

The initial decision by the City Planning Commission has been to recommend that the height limit waiver be denied. The City Council traditionally looks to the council member representing the area of proposed developments in making decisions. but councilwoman LaToya Cantrell’s spokesman David Winkler-Schmit commented on Monday that Cantrell is still deliberating the proposal, meeting with “dozens of neighbors” and fellow council members “to see if there’s a way to make it work.”

This current debate over the height of the new hotel sounds very similar to many other recent fights over high-rise developments, many of them focused on height. A mixed-used development in the Holy Cross neighborhood was cut back from 13 stories and 284 units to 60 feet and 118 units before getting City Council approval in May.

Plans for a 21-story hotel at the foot of Canal Street – a 255-foot building with a spire up to 350 feet – were dropped after Mayor Mitch Landrieu and preservationists opposed demolishing buildings to make way for the skyscraper. The hotel would have been 280 feet above the area’s 70-foot height limit.

In the Warehouse District, developers cut back the height of the Tracage apartment building from 40 stories to 24 stories to 16 stories before getting council approval in January.

Do you think the height limit should still be enforced?

This Street Drummer Has The Fastest Hands In The World (Video)