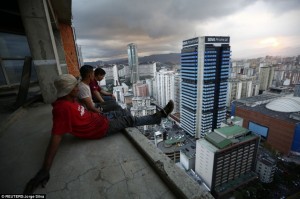 The Tower of David skyscraper — a 45-story unfinished highrise in downtown Caracas, Venezuela has become home to over 4,400 people. Residents of the city and people around the world who know about ‘The Tower of David’ call it the world’s tallest squat, a surreal vertical slum straight out of a science fiction movie.

City officials and armed police have just begun the process of relocating the building’s inhabitants to free public housing outside the capital. If the city can successfully move all the current ‘squaters’, it will bring an end to what many consider to be the biggest eye-sore of the city – a onetime luxury skyscraper that had become a broken labyrinthine village of make-shift homes and shops. It has a barber salon, basketball courts, and even its own evangelical prayer meetings.

The building needs to be emptied and thoroughly examined to determine whether it is still structurally sound after residents had used bricks and cinder blocks to create homes in the cavernous space.

The original name for the building was ‘Confinanzas’, but it received its current nickname from its chief financier, David Brillembourg, who died in 1993.

Construction of the award-winning design began in 1990, and there were hopes that the office block, luxury hotel and convention center would revitalize the city. There was a helipad for the banking executives who would enjoy commanding views of downtown Caracas. But work came to a halt in 1994 when a financial crisis swept the nation. The half-finished empty building was quickly occupied by vagrants and vandals.

The Tower of David’s true “birth,” however, came in 2007 when an ex-convict turned evangelical minister led a massive occupation of the building. The government essentially turned a blind eye as about 2,000 squatters moved into the massive high-rise.

Gladys Flores is a 46 year-old mother of five who moved into the building during the first wave, she became the mayor of the 15th floor. She came in the hope of starting a new life in the city center, close to jobs.

Some of the residents have poured significant money and sweat into their individual spaces, even going so far as to install ceramic tiles and modern furnishings, while others have simply sprawled on wet floors with old bedsheets for walls.

Since 2007, The Tower of David has become a true celebrity. It has been the subject of hundreds of photo spreads and video shoots. Last year, in the television series Homeland, one of the stars, Nicholas Brody, took refuge in the tower depicted as being full of criminals, prostitutes and drug dealers. In 2012, an installation at the Venice Architecture Biennale about The Tower of David won first place for best project.

For many of the residents, however, the building is simply considered home. They say they are grateful for the new public housing, but they are also reluctant to say goodbye.

The following is a recent video showing life at The Tower of David before they started the evacuation;