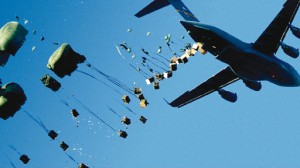 According the today’s release by the Pentagon, the U.S. military is currently undergoing targeted airstrikes and is dropping humanitarian aid to the Iraqi city of Amirli, which has been cut off from food and water for nearly two months by Islamic State extremists.

The US has joined forces with Australia, France, and Britain for military air support of the aid drop. The aid operation was largely due a request for help from the Iraqi government.

The united air strikes were targeted against Islamic State militants in order to support the aid delivery.

These specific aid operations will be limited in scope and duration as needed to address the humanitarian crisis in Amirli and protect the civilians trapped in the town.