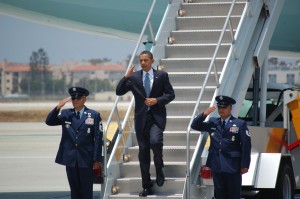 The 2.4 million member American Legion is currently hosting it’s national convention here in Charlotte, and our president will be speaking there tomorrow at the Charlotte Convention Center.

The president is expected to speak in the morning, though no details have been announced. Obama is expected to meet many skeptics, both in the city, and even at the convention itself, including those in his own party.

Democratic U.S. Sen. Kay Hagan, who is also scheduled to speak at the Charlotte convention put out a statement last week that criticized the Obama administration’s handling of the problems at the VA, which has been plagued with delays in delivering medical care and alleged efforts to cover up problems.

“The Obama Administration has not yet done enough to earn the lasting trust of our veterans and implement real and permanent reforms at the VA, I hope to hear the President address these challenges.” remarked Ms. Hagan.

Obama will arrive in Charlotte via Air Force One at 11:20 a.m. at North Carolina Air National Guard Base, according to the White House press office. He is set to deliver his remarks to the American Legion in Center City at 12pm at the Charlotte Convention Center.

By 1:10 p.m., his plane is expected to depart, according to the White House press office, which added that his arrival and departure are not open to the public.

If you’re planning on traveling around the Charlotte Douglas International Airport or the Charlotte Convention Center between 10:30am-2pm, be prepared for delays.