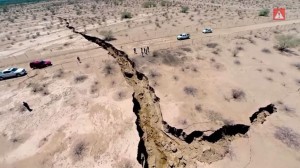 One of the craziest ‘sink-holes’ in the world has just formed in Mexico. Top scientists around the world are still puzzled as to what exactly the giant fissure in northern Mexico actually is.

The mammoth split in the earth, which currently runs almost a mile, is about 30 feet deep and is just more than 15 feet across at its widest spot. Locals found a split a rural road just west of the city of Hermosillo in the Mexican state of Sonora this past week.

The following video of the split, recorded from a flying video drone, follows the arc of the chasm, which in some spots looks wide enough to swallow a truck;

Some scientists think that seismic activity is to blame — the USGS reports Mexico is one of the world’s most seismically active areas, and a magnitude 5.0-quake occurred earlier this month off the coast near Hermosillo — others point to an underground stream that eroded the ground above it.

Expreso, a Mexican newspaper, cites social media reports of heavy rainfall in the area prior to the rift opening. The newspaper also reports that the crack opened last Friday, instead of Tuesday, as Excelsior reports.

What do you think caused the crack?