“The Price is Right” model Manuela Arbelaez was sure she would be fired after mistakenly revealing the price of a new car on the game show.

“It was a brain fart, I just zoned out. I literally did not see that coming. My body took over and reacted before my brain had a chance to stop it.” commented Arbelaez. 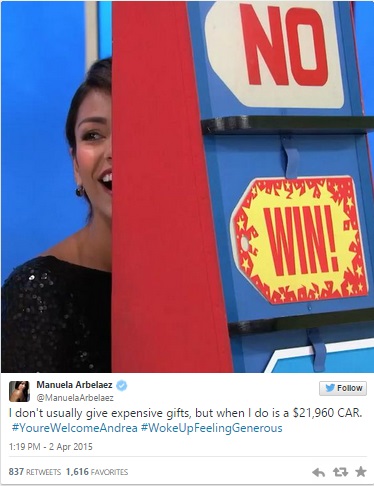 Immidiantely after the mistake, she went back stage and burst into tears. “We took a commercial break, and I was still very overwhelmed, I was in tears. I thought, ‘Well, this is it.’ I asked the producers, ‘Am I going to be fired?’ They started laughing and told me of course I wouldn’t be fired.” she remarked.

Arbelaez said she wasn’t reprimanded for the error, and $21,960 wasn’t deducted from her paycheck. She noted that there have been many model mishaps over the show’s 43 seasons.

Several years ago one of the models crashed a car into Door 3 and a few years after that, another model gave away a trip to Disneyland.

Do you think she should have been fired?