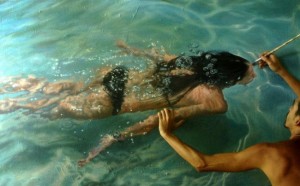 Gustavo Silva Nuñez, a realist painter from Venezuela, started making unbelievably lifelike paintings of people swimming in water only a few years ago. His revolutionary use of light and reflections making the paintings seem to be more than 3-d – they appear to be truly life-like, as if you’re actually standing next to the swimmers.

Gustavo has already amassed over 62,000 followers on Instagram and his following now seems to be doubling ever few weeks.

In one of the shots, Mr Nuñez is pictured crouching on the floor next to one of his paintings, staring into the water as though he is about to jump in.

At first glance, most of his pictures look like real life. At second glace, they seem to be some fancy new 3-d photo.

Yes, they are seriously paintings…

His depth perception is crazy good

But this guy is a pure genius…

They’re even more impressive close up…

All in a day’s work…