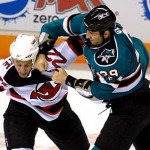 Today is the day! Expect something to break over next couple hours as the #SJSharks Ice for final 2 hours before trade deadline.

The NHL trade deadline is here, and one of the biggest names that is expected to still be available is New York Islanders left winger Thomas Vanek. While we wait to see whether or not Vanek will be moved, there are reports circulating that the San Jose Sharks are “aggressively” pursuing the forward.

It’s NHL Trade Deadline day which means it’s a national holiday for hockey fans all across North America. Names like Thomas Vanek, Matt Moulson and Ryan Kesler are just some of the players rumored to be on the move by the end of the day. Also, which teams are going to stock up for a playoff run; which are selling off players to invest in the future?

We will fill you in all day long with this live rumor and deal tracker that will be updated as we receive new information. NHL reporter Michael Straw will be live at First Niagara Center in Buffalo on Wednesday covering the events that happen throughout day. Be sure to follow along here as well as on Twitter @TheMikeStraw.

The most recent rumors appear at the top of the tracker. The further you scroll, the older the rumor is.

Who do you think has the best shot?

Charlotte’s Beloved Bad Daddy’s Burger Bar Is Being Sold For $21...