A new video has just been released showing an unnamed voter trying to vote for a Republican candidate, while the machine chooses the Democrat’s name; 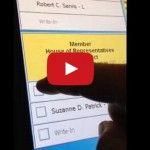 The problem emerged throughout the greater Virginia Beach area, where dozens of voters reported that machines were recording their votes for Rep. Scott Rigell as votes for his opponent, Suzanne Patrick.

By mid-afternoon, Rigell said he’d heard reports of problems in 39 precincts. He said he was concerned that defective machines might still be in use and is upset that machines were apparently not tested after they were trucked to polling places.

Did you experience any glitches while voting today? Please comment below