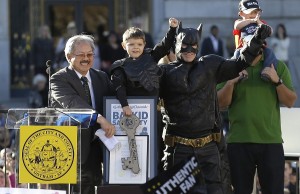 The heartwarming story of young Miles Scott who had all those kind Samaritans in San Francisco turn out to cheer him on as his wish to be Batman was fulfilled by the Make-A-Wish foundation is the subject of a new documentary. The adventure was organized for Miles on November 15, 2013, when he was 5 years old and being treated for leukemia.

His adventure consisted of being Batkid, the sidekick of Batman as they fought villains in order to save a damsel in distress. After saving the day, Miles was honored as a hero by San Francisco mayor Ed Lee, and was given a key to the city.

Warner Bros. new documentary follows the story and how it went viral on social media. The release date is June 26, 2015. Watch the official trailer here;