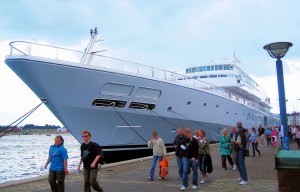 The 454-foot yacht glided into the Charleston Harbor this past weekend, making it the largest yacht in history to ever dock at the Charleston City Marina.

Officials at the marina remarked that it took six people to pull the yacht into place and tie it to the dock.

The record breaking super yacht reportedly cost over $200 million to build, and recently hosted Oprah Winfrey in a voyage on the Atlantic.

There are, however, some bigger yachts out there available for cruises at fairly low costs – click here for up to the minute pricing.

The Rising Sun super-yacht is currently planning to stay in Charleston Harbor for at least two weeks.

Charleston Police Stop Anti-Trump Protest For Protesting Without A Permit and...