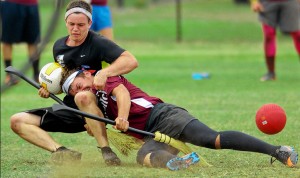 The top ranking Universities from all across America are coming to Rock Hill this spring for the U.S. Quidditch World Cup. The monumental event will include 80 collegiate and club teams from across the nation.

Rock Hill hosted the SouthEastern regional qualifying Quidditch tournament last year, and saw an incredible turnout. This year, the NQA (Nation Quidditch Association) chose the city to host the national championship, which could attract over 10,000 visitors.

Organizers are planning for the most impressive atmosphere to date, extending beyond just the games to include, live music, entertainment, as well as children’s activities.

If you’re wondering what exactly is the rapidly growing sport of Quidditch, you can check out the official NQA rule book by clicking here.