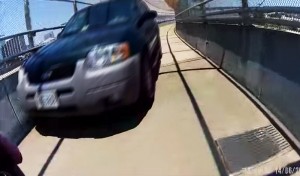 In this shocking video of a bike-car, cyclist Kelley Howell rides down the cage-enclosed pedestrian sidewalk along Norfolk’s Berkley Bridge when an unauthorized vehicle drives into her. She fortunately had a go-pro camera mounted to her handlebars to capture the horrific event.

Neither Howell nor the SUV driver had a cellphone to call for help.

When Howell called police later, she was shifted between Norfolk police and Virginia State Police, each telling her the bridge isn’t in their jurisdiction.

Norfolk officers came to her home later, but told Howell that they could only issue tickets at the scene of an accident;

Mercer County Is Rallying The City For A Historic 40-Day Litter...